AstaroTheatro Festival 2018
10 years AstaroTheatro
Theatre&Activism > Omnia Sunt Communia
AstaroTheatro, the smallest theatre in Amsterdam, has been an Artistic Ithaca for hundreds of artists over the last 10 years of its existence
An Agora of Resistance
Sunday 18 May Program 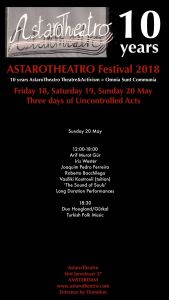 Duo Hoogland/Gürkal focuses on Turkish folk music songs from different regions of Turkey. Eva Hoogland has dedicated herself to Turkish folk music singing, while Giray Gürkal, originally an improviser and guitarist, plays the saz and fretless guitar. They mostly approach the music traditionally, while sometimes also bending the music towards their own perspectives.